Yes, I chose this weird shot...

We actually took a little vacation in February!  Check out the photos from our awesome trip to San Francisco! I whisked Art away to New Orleans for a 40th birthday weekend extravaganza.  Needless to say there was lots of birding, beer, and eating! I had cured and smoked a ham for Christmas dinner, but Ken had become concerned that it might not be enough for everyone. I disagreed at first (he had planned on getting a turducken to go with the ham), but decided after I got to SC that a second entree might be a good idea after all.

Christmas Eve dinner was going to be wild sockeye salmon, so I needed something besides fish or pork. After poking around a bit on localharvest, I found Live Oak Farms in Woodruff. Wednesday morning i drove to Charlotte to pick up Carly. Woodruff is an easy detour on the way back to Greenville and taking the wife on a food-related excursion is always a good way to start a trip!

It was an easy farm to find, and we were soon at their store. The only poultry they has was whole chickens and turkeys, so I picked up two 2.5 – 3 pound sirloin tip roasts. They also had farmstead butter and cheeses as well as raw milk. We were really curious about the latter, but they only had it in gallons the day we were there. At a different time of year (one where the refrigerator was not already packed) we would have bought some; maybe next time.

The Parmesan was wonderful – nutty and fresh. The butter was great as well (I used it to saute the green beans Christmas Eve). We also picked up a goat feta that worked well in Friday’s salad; moist without being soggy and with an appropriate amount of salt.

The beef, from Red Devon cattle, was high grade, flavorful and tender. As it should be. I browned it on the stove top, then moved it to the oven and roasted until it hit 125 degrees minimum. While resting it continued to cook and finished at 130. Because of the may things worked out, the oven wound up being pretty well stuffed. This resulted in some uneven cooking, but that fact was actually to our advantage. At least half of the meat-eating adults were the sort who were just unwilling to eat any beef with the slightest bit of color to it; there ended up being enough “medium” meat to satisfy their palates. No other way to describe last weekend but a grand adventure. We set out on a spring Ramp hunt. As you can see from the picture of Art lounging in the Ramps, we found plenty. But…we also found this sweet little toad who posed for a few pictures and then lead us right to: That’s right – $50/lb morel mushrooms. That shot is actually of the exact morel mushroom the toad was kind enough to draw my attention to! We found about a dozen more. There was also a good deal of cooperative wildlife that day, including this snake who posed for several shots. Sunday
I can sum up Sunday in one word: Goslings. Nothing like camping and bringing the bears with you. Our bears proved that while bear cans may be resistant for wild bears — the teddy bear has no problem breaking into it. 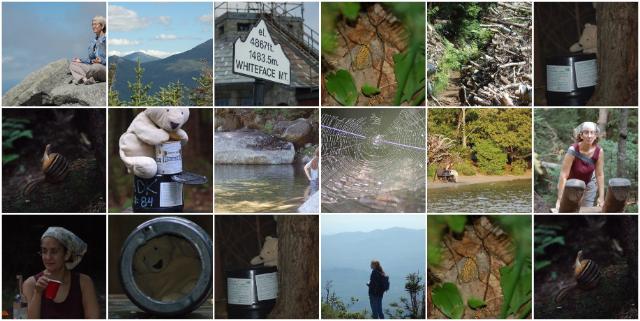 Two farm-raised trout stuffed with ramps which we foraged for that afternoon. I threw in some herbed ricotta that Carly had whipped up a few days prior. I have had trouble keeping fish from sticking to the grill, so I laid them on a bed of ramp leaves. The ramp leaves burned away and the fish came right off. After getting the (hardwood) fire good and hot, adding a piece of dripping wet cherry really got the smoke going. It was pretty much a perfect meal. Just enough food. The beer matched well. The fish was smoky but still moist because of the ricotta. The bread had enough sweetness to complement the ramps.

How did that happen? It’s October? Okay then — Here’s what’s been happening since the last update in August.

When we last left you, Art and Carly had just come home from a lovely summer vacation in the Adirondacks.

For my birthday we repainted (yeah!) and re-organized the front room of the house! It’s the first time we’ve painted downstairs since we moved in 5 years ago! It’s now “Vanilla Scone” and the trim is a dark purple.

Art of course then had a couple of shows. The first was in Alexandria, and then back to Solomon for Annmarie Gardens and then down to Crozet, just this past weekend.

Of course, being us we’ve been hitting the farmers’ markets and other local farms in search of seasonal local goodies.

Then of course it was time for Holly’s wedding, so we were off to Philly! Not only did we get to enjoy being back in Philadelphia, but also getting to see the whole Drauglis clan in one place — including our young nieces. You can see lots of pictures from our adventures in Philly at Flickr.

We’re back from our trip to the Adirondacks. We went up to Heart Lake again and stayed in a lean-to at the Adirondak Loj. Yes that is spelled correctly. The people who started the lodge were very into the “simplified spelling” movement.

Our shared vacation was very short, but fabulous. The only bad part was that the weather was about 20 degrees colder than usual. It was fine during the day, but dropped into the 30s at night. It was really freaking cold! We did some hiking. We hit Cascade Mountain and hiked to Marcy Dam together, and Art took a solo hike so I could rest.

Of course, we also found a artisan cheesemaker to visit. We visited Nettle Meadow Goat Farm, where they tell you that “happy goats make good cheese.” I have to admit, those were some darn happy looking goats and some pretty tasty cheese. The people were very nice to us, and we even got a great tour of the farm, and met the goats up close and personal!

Here are a few pictures, you can see the rest at Flickr (Vacation 2006 Slide Show).